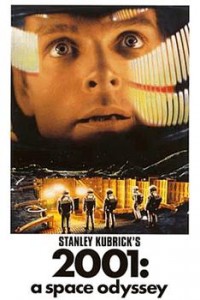 2001: A Space Odyssey was based on a novel written by Arthur C. Clarke. It was produced and directed by Stanley Kubrick in the year 1968.

This is one of my favorite movies. I consider this movie as the cradle of science fiction movies about space, human origins and human evolution. This is the kind of movie that opens your mind for multiples interpretation, you can spend weeks rethinking and discussing its main ideas. Although there are very few dialogs between its characters, Kubrick made his point by presenting spectacular scenes and an impressive soundtrack.

Some people say this movie is way too slow or too boring. But they say that because they just didn’t get the outside view of humankind that is presented in this movie. In fact, this movie was selected by the United States National Film Preservation Board to be preserved in the Library of Congress because they consider it is a culturally significant film.

I can compare this movie to Jules Verne’s books. They both presented a technology that was many years ahead of its time. I mean, in this movie you can find human hibernation, video conference, artificial intelligence, international space stations, interplanetary trips and even tablets! Remember, its is a movie of 1968, It was made a year before Apollo 11 landed on the moon. On this time, transistors were pretty big and there was not something similar to todays PC, BluRays or LCD Screens.

On the other side, the realistic features of the movie are pretty impressive. Next time you watch it, please take care of tinny details other space movies forget:

If you have not yet see this movie, and you like science fiction, please do yourself a favor and see it! I recommend you blu-ray version in order to enjoy the fine models, music and details of this movie. You can find it here: 2001: A Space Odyssey [Blu-ray / DVD]

The pictures presented here are screen-shots of the movie.